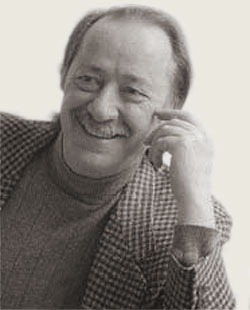 PINO — Born Giuseppe Dangelico in Bari on November 8, 1939, Pino began his studies at the city's Art Institute. In 1960, he entered Milan's Academy of Brera, where he perfected his talent and skill for painting nudes. In the two years he studied at the Academy, he came under the influence of the Pre-Raphaelites and Macchiaioli. Pino also experimented with Expressionism of the late sixties during his stay in Milan. From 1960 to 1979, his work appeared in several major exhibitions throughout Italy and Europe. At the same time, he was commissioned by Italy's two largest publishers, Mondadori and Rizzoli, for book illustrations. However, Pino felt restricted in Milan. He wanted more artistic freedom, which he believed existed in the United States.

Pino emigrated to the United States in 1979 under the sponsorship of Borghi Gallery, where he held several show in New York and Massachusetts. In 1980, after knocking on many doors, Zebra Books Publishers commissioned him to do his first book cover. His interpretation was new, fresh and sensual, an illustration so successful that he gained entry into creative relationships with many leading publishers of Romance novels.

Pino's popularity grew within the literary community and he became the artist-in-demand for Zebra, Bantam, Simon, and Schuster, Harlequin, Penguin USA and Dell. To date, Pino has illustrated 3,000 books; his style has dominated and influenced the market.

Although Pino devoted thirteen years to illustrating book covers, he never abandoned his desire to return to fine art. In the United States he became fascinated with the works of Sorolla, Sargent Benson and William Merrit Chase. In 1992, he contacted one of the major galleries in Scottsdale, Arizona, the May Gallery, and sent it five paintings, which were well received. Since then, his paintings have appeared in Morris and Whiteside Gallery in Hilton Head and Stuart Johnson's Settlers West Gallery in Tucson. Pino has been invited to make several appearances on major TV networks and has been interviewed in national and international journals. In addition, his ability to capture the movements and expressions of his subjects has brought him private commissions to do portraits.